For those who have seen THE OTHER WOMAN in theaters, this new trailer of the highly successful book by John Green may be old news to you. (Or, you just can’t get OneRepublic’s “What You Wanted” out of your head from seeing it so many times.) But for those who haven’t seen it in theaters, here it is: the new extended trailer for THE FAULT IN OUR STARS! Thanks, Yahoo Movies.

Summary: Hazel and Gus are two teenagers who share an acerbic wit, a disdain for the conventional, and a love that sweeps them on a journey. Their relationship is all the more miraculous given that Hazel’s other constant companion is an oxygen tank, Gus jokes about his prosthetic leg, and they met and fell in love at a cancer support group.

THE FAULT IN OUR STARS opens in theaters June 6th! We talked to Joshua Malina on the Divergent Premiere red carpet about “Scandal” with our favorite ladies from Fangirlish and That’s Normal. He’s not giving any spoilers away, so be sure to tune into “Scandal” on ABC tonight to see #WhoWasShot! We finally have a concrete release time for THE MAZE RUNNER trailer! Dylan O’Brien tweeted today that it will first premiere during this Monday’s Teen Wolf, so make sure you tune in!

The Box is making a delivery. Watch @MTV and @MTVTeenWolf this week for exclusive content from @MazeRunnerMovie. pic.twitter.com/klRHmnSCkE

THE MAZE RUNNER twitter also revealed that MTV will be releasing new content from the film all week. Exciting! UK Paramore fans!! Paramore will headline the Reading and Leeds Festival along with Queens of the Stone Age on August 22 and 23!

Buy tickets on the Reading and Leeds website HERE now! Hold on, Christina!! In this exclusive Divergent clip released from Moviefone, Eric (Jai Courtney) throws Christina (Zoe Kravitz) off of the chasm to show her what he believes it’s really like to be Dauntless. “Divergent” star Shailene Woodley’s covers the latest issue of  The Hollywood Reporter, with author Veronica Roth joining her on a few shots. Check out more of the interview over at the source. Read an intricate interview from “Divergent” and “The Fault in Our Stars” star Shailene Woodley with The Hollywood Reporter.

Despite the appearance of overnight success, Woodley worked for 17 years to reach this moment. The native Angeleno, who has a younger brother, Tanner, began working at age 5 in commercials, appearing in more than 40 TV spots, including ads for Leapfrog, Hertz and a Honda minivan. Her parents — a middle-school counselor mother and a former elementary-school principal father who now is a family therapist — happily drove her to auditions but insisted that her education stay on track. Woodley was a 4.0 student who took AP classes at Simi Valley High School but interestingly avoided the drama club because “acting was such a big part of my life outside of high school, and I wanted to really dedicate high school to other things that I was passionate about.” Instead, the “choir nerd” sang alto for four years, even as she starred on Secret Life.

Along the way, she had her share of disappointments, like losing out to Dakota Fanning for the drama I Am Sam at age 9. Recalls Woodley: “My dad pulled me aside, and he said: ‘Shai, what are you doing? You have so much anger, and you’re feeling so let down by the fact that you didn’t book [this]. I want you to close your eyes right now and picture this Dakota girl, and I want you to send her so much love and so much light because one day you’re going to book something that you really want, and you’re not going to want all of the girls around you that you competed against to feel anger against you. You’re going to want them to support you on your journey. And so it’s your turn right now to support Dakota on her journey.’ And so I did that.”

On her friendship with Laura Dern of The Fault in Our Stars:

When Laura Dern was shooting the upcoming tearjerker Fault in Our Stars opposite Woodley, the pair quickly bonded over their shared experience as former child actors with fierce hands-on mothers. Dern recalls one of their many dinners near the Pittsburgh shoot and delivers a spot-on Woodley impression.

“Shailene’s like, ‘Hey, wow!’ Big open smile,” says Dern. ” ‘God, great, I looked at your menu. It’s so awesome. Hey, what kind of oil do you guys cook in? Oh, you do? Hmm, you never use beef fat from sustainable farms where it’s grass-fed? Oh wow, you guys are open to that? Cool. Can we have a tour of your kitchen?’ ”

The next thing Dern remembers is touring a meat locker in the restaurant’s basement, discussing how to cut the cattle in the most honorable way and how to use every part of the animal. “People might think they’re saving the planet, taking half steps,” says Dern. “Shailene is taking it to such a different level.”

Dern says the two actresses have become so close that she considers Woodley a member of her family. “There are times when I have called my house when out of town and found out that Shailene’s over here making dinner with my children,” she says.

Read and see more of the article, as well as HQ pictures HERE. Check out this Behind-the-Scenes video with Paramore on the set of “Ain’t It Fun”! Watch them set  world records such as catching feathers in a barn, bandmates Taylor York and Jeremy Davis unwrapping Hayley Williams as a mummy, running through a line of banners, and breaking records (literally!).

Also, if you haven’t already seen the full video, here it is! 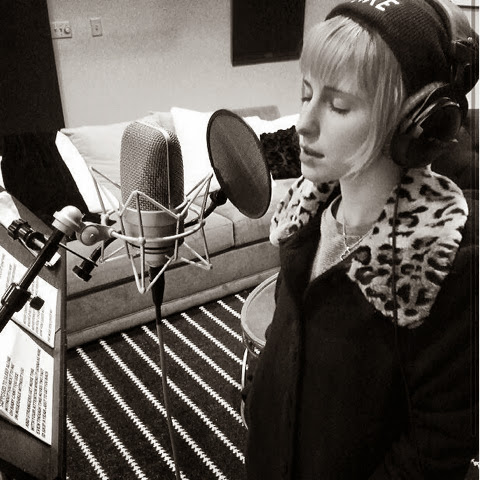 New Found Glory guitarist Chad Gilbert released a pic of his girlfriend Hayley Williams of Paramore in the studio doing backing vocals for his project “What’s Eating Gilbert”. This is so cool! Hayley has been praising Chad about this  for a few months now, and it’s so sweet to see how supportive she is. Talk about a fandom collision between the two bands!

We can’t wait to hear the end result soon! The music website Alter the Press! loves Paramore, so it’s no surprise that they would express that love into 5 reasons why they think the band’s lead singer, Hayley Williams, is a top notch role model and fearless in the music industry. Check out their list below & be sure to read their explanations over at the source:

1. She Proved Everybody Wrong

2. She’s the Taylor Swift of the Rock World